To all current and new patients:

We are open and available to handle your emergency needs. 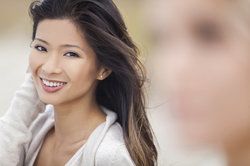 Over the past decade or so, a lot of media attention has been given to cosmetic dentistry, and specifically to porcelain veneers, which have been the fundamental components of so many dramatic smile makeovers. During this time, millions of people have reinvented their smiles through the placement of custom-crafted porcelain veneers, which have revolutionized the dental industry.

Traditional porcelain veneers are unmatched in terms of their natural appearance; like tooth enamel, porcelain is translucent, allowing some light to pass through its surface rather than simply reflecting it. Especially when customized by an experienced dentist with a keen eye for aesthetics such as Dr. Peter Hellweg, porcelain veneers can be virtually indistinguishable from natural teeth in terms of their size, shape, color, and even texture.

Still, while traditional porcelain veneers offer many benefits, they are not without their drawbacks. Because teeth would look unnaturally thick after veneers were affixed, dentists have historically had to remove some enamel before placing veneers in order to accommodate their width. As a result, a patient who had veneers placed would always be obligated to wear veneers, making the treatment irreversible. If the veneers became dislodged, or when they eventually became worn, they would have to be replaced. The patient’s “naked” teeth would no longer be functional or aesthetically acceptable.

There is an alternative to traditional porcelain veneers, however: LUMINEERS®. At the cosmetic dentistry office of Dr. Peter Hellwig in San Diego, LUMINEERS® treatment allows patients to enjoy all of the benefits of porcelain veneers without having to compromise the structural integrity of their natural teeth to the extent that they would have to with traditional veneers. LUMINEERS® are no thicker than the average contact lens and fit seamlessly over the teeth to conceal such flaws as chips, cracks, imperfections in shape and size, and discoloration.

If LUMINEERS® are so great, why don’t more dentists offer them?

Why have you not heard of LUMINEERS® until now, you may be asking yourself? Lots of dentists offer traditional porcelain veneers - why don’t they offer LUMINEERS®? This is because most dentists are not trained and certified to offer LUMINEERS®. Not just any dentist is allowed to offer this extraordinary treatment. Dr. Hellwig has put in the extra studying, training, and effort required to earn the certification necessary to call himself a LUMINEERS® Dentist.

What other advantages do LUMINEERS® offer over traditional veneers?

LUMINEERS® require only minimal preparation of your teeth before they are placed. This means that:

Ultimately, you will sacrifice nothing by opting for LUMINEERS® over traditional porcelain veneers, but you will potentially gain a lot. To find out whether you are a suitable candidate for this exceptional cosmetic dentistry treatment, we urge you to contact the dental practice of Dr. Peter Hellwig today.

Send Us a Message

“I've been seeing Dr. Hellwig and his talented team for 20+ years and I continue, year after year, to refer friends and family members to his practice. Dr. Hellwig is a true professional and funny to boot. From the moment you arrive, you will sense the relaxed atmosphere. Give him and his talented group a try. You will not be disappointed.”

In addition to our normal office hours we are open on Friday for appointments by special request.

In addition to our normal office hours we are open on Friday for appointments by special request.